After World War II, ships loaded with chemical warfare agents (CWAs) were scuttled in Swedish coastal waters. Investigations show that low levels of CWAs are still detectable in sediment and fish in the area. How these concentrations affect the biota in the area is still unknown.

Dumped CWAs have so far been discovered at two locations along Sweden's coast, west of the island of Måseskär in the Skagerrak and in the Gotland Deep in the Baltic Sea.

The wrecks west of Måseskär

There is a dumping area west of the island of Måseskär, in the Skagerrak, where 28 ships loaded with CWAs were scuttled after World War II. Low levels of CWAs have been detected in the sediment, fish and shellfish over the years, indicating the presence of warfare agents in the ships' cargoes.

In 1992, low concentrations of mustard gas were measured in the marine sediments west of the island of Måseskär. In 2016-2017, low concentrations of the chemical warfare agent Clark I were found in northern prawn, Norway lobster and Torbay sole. An additional study in 2019 demonstrated the presence of degradation products of Clark I and/or II in locally caught hagfish. During further studies in 2021, traces of CWAs were detected in 37 percent of the biota samples and in 27 percent of the sediment samples.

For more information, see the report Exploratory fishing in connection to wrecks containing chemical warfare agents, 2021 (in Swedish) and below in the section “Investigations in Swedish waters”.

Several wrecks within the same area

The highest concentration of wrecks are located within an area of ​​five square kilometres. There are 13 wrecks within this area and 15 more in the vicinity. The area is marked on the map and is approximately 20 nautical miles west of the island of Måseskär. The wrecks are located at a depth of between 140 and 280 meters. 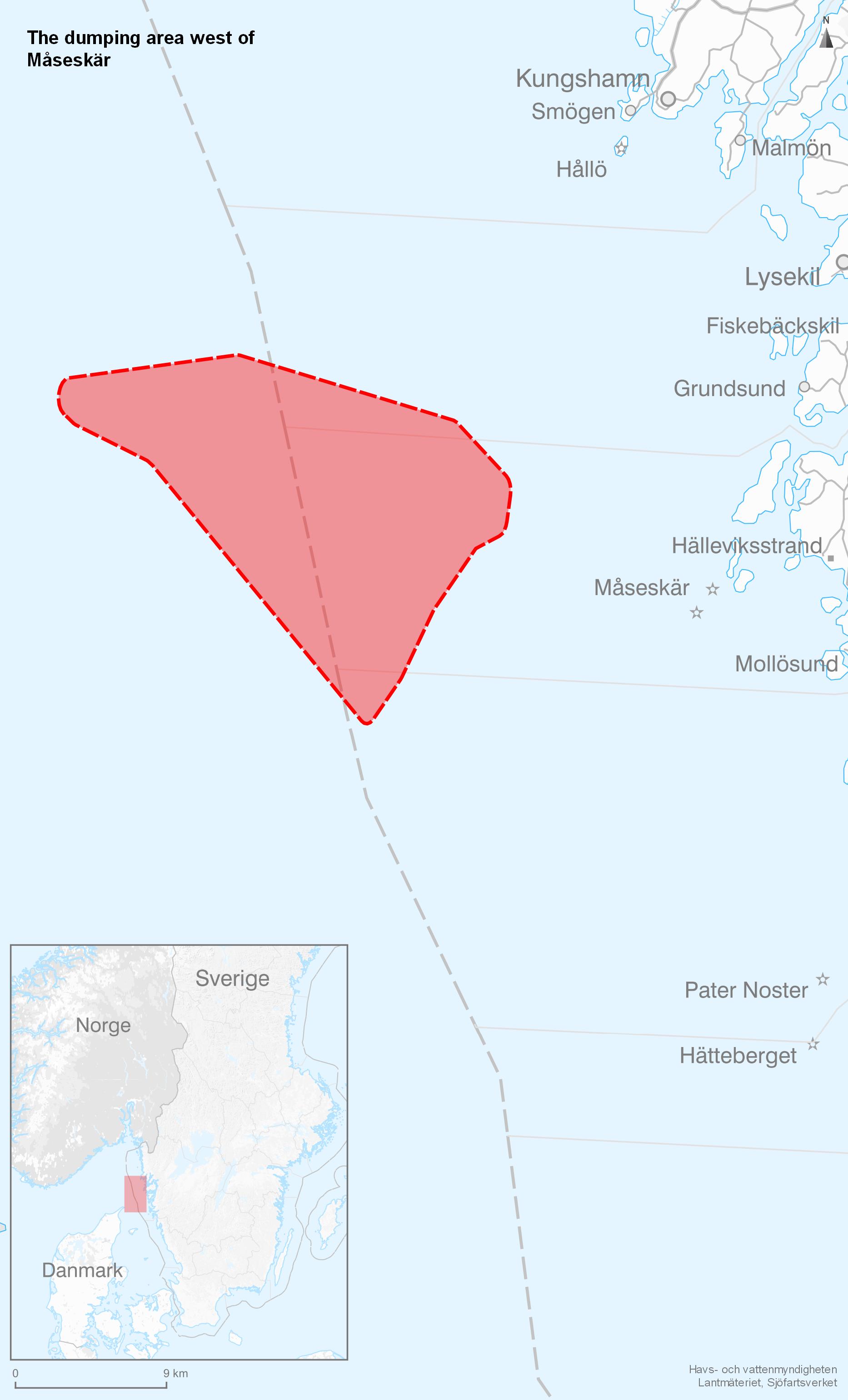 Several different types of ships were scuttled, including naval ships of different sizes as well as passenger- and merchant ships, which were used for the transportation of materials to the area. They were part of a large number of ships originally located in northern Germany and seized by the Allies after the war. Many of them were in poor condition or damaged. Most were scuttled in 1946-1947 after World War II, in operations carried out by the Allies. The ships were filled with conventional and/or chemical munitions and then towed or propelled by own machine to deep-water areas in the Skagerrak where they were scuttled.

The information available on the amounts of warfare materials that were dumped during these operations is contradictory, but studies describe that at least 170,000 tonnes of chemical weapons were dumped in the Skagerrak during this time. The vast majority was probably dumped at greater depths outside of Norway in the Arendal deep, but results from the studies carried out in the area west of Måseskär show that chemical weapons were dumped in this area as well. The wrecks also likely contain conventional ammunition and smaller amounts of oil.

You can read more about the wrecks west of Måseskär in the Swedish Maritime Administration’s report Environmental hazards with sunken shipwrecks II, 2015 (in Swedish).

On behalf of the Swedish Agency for Marine and Water Management (SwAM), investigations have been carried out in connection to dumping areas along Sweden's west and east coast.

Investigations in the Skagerrak

In 2016 and 2017, a study was carried out in the dumping area near Måseskär. The investigation involved exploratory fishing near the wrecks and analysis of the catch showed traces of degradation products from CWAs Clark I and/or Clark II. The results are presented in the report Investigation of biota in connection to scuttled ships with chemical ammunition, 2018 (in Swedish).

In 2019, a new study was carried out to investigate how widespread the environmental contamination from chemical munition is. Exploratory fishing took place in the eastern parts of the dumping area near Måseskär, which had not been investigated before. Hagfish, northern prawn and Norway lobster were caught and analysed. The analytical results of biota showed traces of degradation products from the CWAs Clark I and/or II. Degradation products were detected in a pooled sample from hagfish caught downstream from the wreck Bal141 on the west coast. Both Clark I and II contain arsenic compounds, which may explain observed high levels of arsenic in the sediments around and downstream of the wreck area. For the first time, affected biota was found within Swedish territorial waters, which potentially open up opportunities for remedial actions.

The investigation in 2021 complemented previous exploratory fishing focusing on new wrecks (two wrecks located in the far west and three in the outer south-eastern part of the area) as well as additional efforts in analysing sediment samples. Just as in previous studies of biota, tissue from the target species northern prawn, Norway lobster and hagfish was analysed.

Results from the investigations

The results from the chemical analysis in 2021 of the target species showed traces of CWAs in the form of degradables from Triphenylarsine and Clark I and/or Clark II. Triphenylarsine was commonly added to mustard gas to enhance its capabilities during winter times. During the sediment sampling, four of the five investigated wrecks showed traces of CWAs in the sediment close to the ship wrecks. There is a high activity of bottom trawling in the area which can contribute to the spread of contaminated sediment.

In addition, detection of CWAs in tissue samples from species in several trophic levels of the food web indicates that CWAs can spread between trophic levels.

The results are further presented in the report Exploratory fishing in connection to wrecks containing CWAs, 2021 (in Swedish).

Investigations in the Baltic Sea

CWAs have also been detected in the Gotland Deep close to locations with confirmed mustard gas bombs, which have been identified in previous studies using remotely operated vehicles (ROV).

During the study in 2019, exploratory fishing was performed near positions of mustard gas bombs in the Gotland Deep. Cod and flounder were caught and analysed, alongside sediment samples.

Degradation products of CWAs were detected in two of the six pooled samples of cod caught in the area. The products found in cod were Clark I/II and Triphenylarsine, products often included in mustard gas.

All sediment samples contained products of CWAs, degradation products from Clark I/II, arsine oil and Adamsite. The quantities were measurable but below the limit of quantification. The results indicate that the area close to the dumped material is contaminated by the contents of the dumped CWAs. Fish in the area does also, to a smaller extent, contain degradation products of CWAs.

Results from the study

The results are presented in the report Investigation of biota and sediment in connection to dumping areas of chemical ammunition on the west and east coast of Sweden, 2019 (in Swedish).

Risks with chemical warfare agents in biota and sediment

The risks of dispersal of the contents of the dumped CWAs increase over time due to corrosion of the encapsulating casings. Natural current conditions lead to an increased risk downstream dumping areas. The risk of dispersal of the material can be further exacerbated by human sea-floor activities, such as bottom trawling.