This project is aiming for a ecosystem based management of the Ätran river to increase biodiversity, while still being able to use the river to produce energy from hydro power stations. 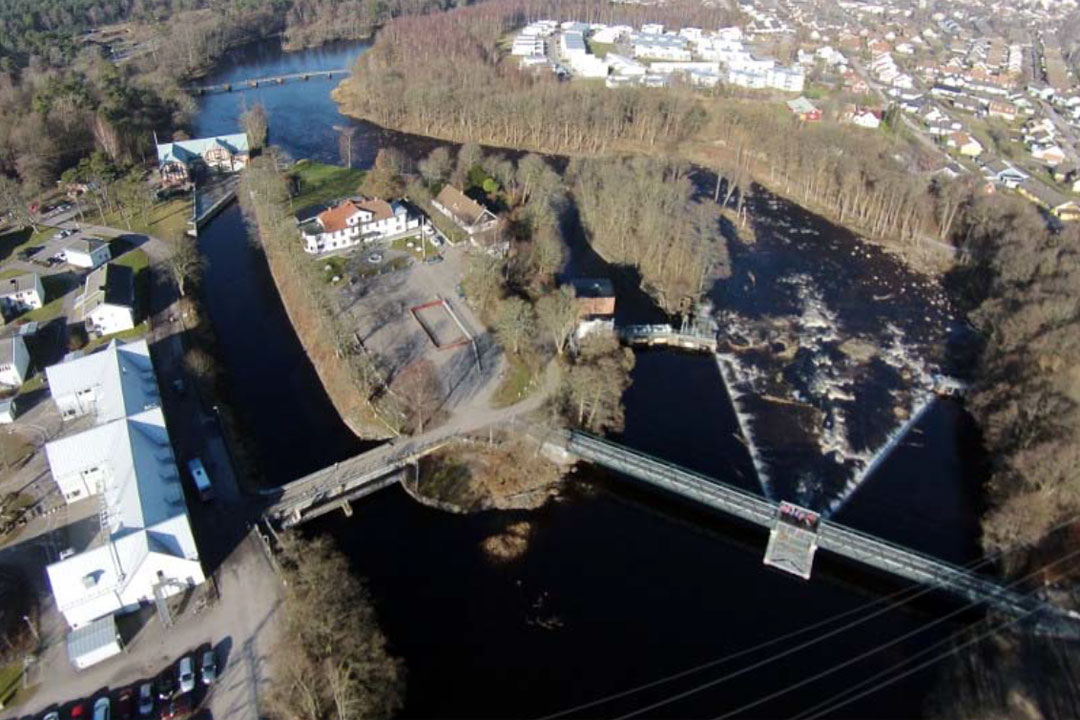 Ätran river from the sky.

The river Ätran in Southern Sweden has been subject to extensive efforts to improve water quality by liming operations since 1978, exceeding 100 000 metric tons of limestone, to counteract acidification caused by acid deposition. Massive economical efforts are made by authorities, industries and individuals to improve water quality and reduce nutrient impact. These efforts aims to restore ecosystems and populations of numerous migrating fish species in the river. The water shead is widely used for production of electricity and 35 hydro power stations are located in the water system. Only one of these sites, the Herting hydropower station, now provide a satisfactory solution for free fish migration.

The situation for migrating fish was not acceptable according to the ecological and sustainable strategies of the Municipality and caused considerable economical losses of tourist incomes for the Municipality and its operators and inhabitants. The Municipality of Falkenberg took action for Sourceto-Sea Management and engagement in collaborative projects, promote best practices, and to improve the management of land, water, coastal and marine linkages as expressed in the Manilla
Declaration adopted by 65 countries in 2012. This Action Platform facilitated contact between decision-makers and experts to provide on-demand knowledge, support, advice and guidance to policy making and implementation on freshwater, land, coast and sea. By doing so, we enhanced the efforts of the international community to fulfill its commitments to the Manila Declaration.

The Municipality is the owner of two hydro power stations situated in a N2000 area close to the river mouth facing the Atlantic ocean. These stations were before 2013 a severe obstacle to upstream and downstream migration of genetically unique salmon (Salmo salar) and sea trout (Salmo trutta) populations in the river. Weak swimming fish species such as European eel (Anguilla anguilla), Sea lamprey (Pteromytzon maritimus), river lamprey (Pteromytzon fluviatilis), bullhead (Cottus gobio), lake (Lota lota) and cyprinide fishes were totally excluded from their important migration routes in the river totally drained by a massive hydropower dam built in 1944 and removed in 2013.

The present report is mainly a summary of the project work and numerous positive effects generated during the work as a result of the measures taken to improve and restore the connectivity and ecosystem functions of the heavily modified river bed. The fish populations in Ätran and it´s important tributary Högvadsån has been constantly investigated since the 1950´s. The University of Karlstad had the mission to investigate the effects on fish populations some years before and after actions. Among other techniques they used telemetry and specially designed fish traps. The main conclusions concerning the Herting project are:

Swedish Agency for Marine and Water Management states about the project

Natural fish migration and reproduction has radically improved in the Ätran river system following action within the Herting project 2013. These actions are crucial and beneficial in heavily modified water bodies (HMWB) to reach good ecological status, ecosystem resilience and salmon production in accordance with Swedish and international legislation.