The marbled crayfish is considered an invasive species in Sweden. With its origins in the southeastern United States, the species' introduction into the Swedish ecosystem is a threat to the native biological diversity. Measures are being taken to prevent the marbled crayfish's spread. 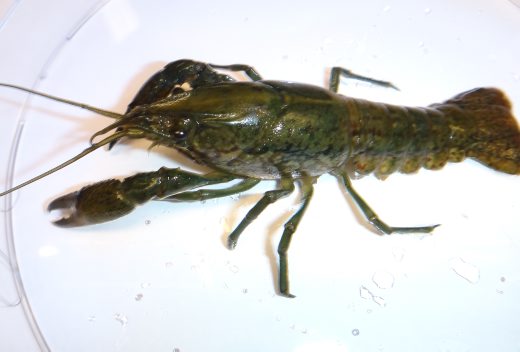 The marbled crayfish is recognizable by its green, shimmering shell. Photo by Thorbjörn Hongslo/National Veterinary Institute.

Despite its origins in tropical regions, the marbled crayfish manages to survive in colder waters. This, along with its ability to bury itself in the mud for added protection against the cold, allows the species to thrive even in Swedish waters. Internationally, the marbled crayfish is a popular aquarium pet; specimens released into the wild have been found in several European countries.

The first sighting of marbled crayfish in Sweden occurred in November 2012 in the Märstaån River. There was concern that they could have migrated to Lake Mälaren and further on to large parts of Stockholm area's waterway.

Because of the potential negative impact on native biodiversity, it is illegal to import the marbled crayfish into Sweden, as well as to store and transport it within the country.

If you suspect that you have found a marbled crayfish in Swedish waters, contact the National Veterinary Institute at +46 (0)18-67 44 71

Spread of Disease - One of Many Risks

Several reasons exist as to why the marbled crayfish is illegal and considered invasive. It can carry diseases that can cripple the domestic freshwater crayfish population and can compete with them for food and space.

The specimens that were found in the Märstaån River have tested negatively for known diseases such as the crayfish plague. However, the marbled crayfish is not an established part of the Swedish ecosystem, and it is unclear whether or not it carries microorganisms that can be harmful to Swedish species.

The marbled crayfish has previously established itself in Madagascar in large numbers, and it has caused concern that it poses a threat to the established fish and crayfish species and could damage the country’s rice cultivation.

The species is also considered a threat because it reproduces by parthenogenesis, a form of asexual reproduction in which fertilization is not needed for creating offspring. If a fertile specimen finds its way into foreign waters, the risk of it establishing itself there in large numbers is very high.

Measures has been taken to prevent further spread of the marbled crayfish and to reduce the risks it poses in Sweden. An important aspect of this work is to identify where other specimens are located and how many exist.