Socio-economic analysis of the cost of inaction of plastic debris 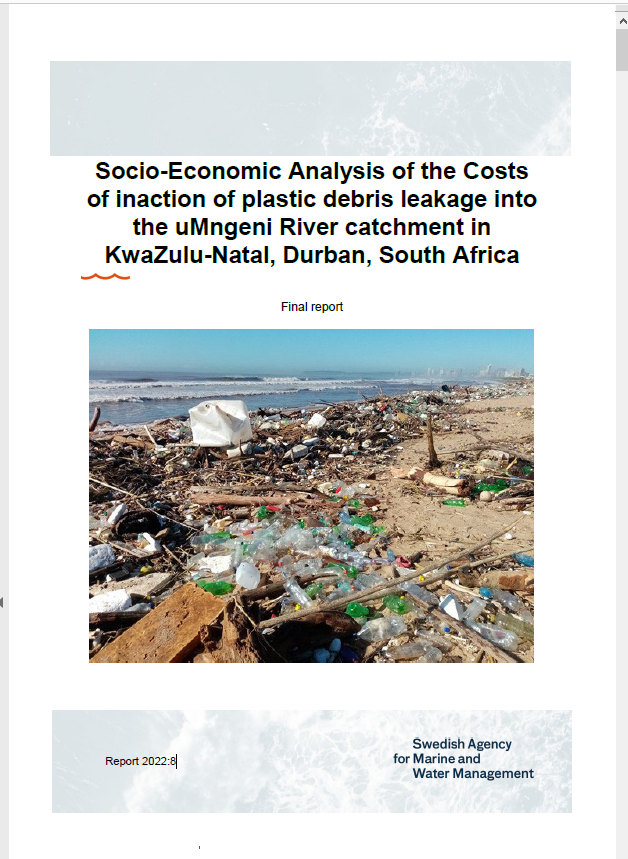 TThe KZN (KwaZulu Natal) floods of April 2022 highlighted many of the fault lines and fractures over the institutional and physical landscape and which constitutes much of the crisis noted with respect to regional plastic pollution in this environment. There were numerous reports and photographs of tonnes of plastic litter which arrived on the city’s beaches as an aftermath of the floods, and this for all the world to see. (BBC, 2022)

Over 440 people are reported to have died, with nearly 4,000 homes destroyed and more than 8,000 damaged, mostly in Durban and its surrounding areas. Water and electricity supplies were severely disrupted, along with other municipal infrastructure (roads, bridges, communications etc.).

The Premier of the province (Sihle Zikalala) is quoted as saying that the magnitude of the damage, will run into billions of rand (Pijoos, 2022), with the eThekwini municipality quoting at least R757million worth of damage (Pijoos, Devastating KwaZulu-Natal floods may have cost eThekwini R757 million, 14).

How do these institutional and physical fractures manifest in terms of the plastics issue, and how were they laid bare in this flooding?

For one, many years of dysfunctionality and poor service delivery within the Durban solid waste environment (and the mismanagement of plastics particularly) allowed much of the plastic waste found in the river and on the beaches to manifest. The various solid waste corruption charges currently under criminal investigation also allude the mismanagement of the solid waste issue at an institutional level and particularly in some of the more rural and township areas that have been most hard hit by the flooding.

As indicated in this report there is a strong link between poor plastic management at source (within the catchment, on the streets and within urban and semi urban areas) and which then finds its way into the rivers. Often on the way to the lowest point in the catchment, many of the poorly serviced stormwater drains are blocked (often with excessive plastic and other litter) and surcharge. This negates the efficacy of the stormwater infrastructure which then has a more significant storm damage effect in lower reaches of the catchment, and which was patently evident in the latest floods.

Additionally, once in the river and now travelling down flooded river systems, this plastic is caught up in other debris blocks and often particularly around culverts, smaller bridges and road causeways. The aperture on these causeways, culverts and bridges are often blocked with this debris, much of it from plastic and other litter and this material causes these bridges to become flooded and the associated infrastructure to fail. This has massive infrastructural repair cost implications.

Similarly, failing and surcharging stormwater systems puts pressure on sewerage infrastructure which is often in the same low-lying areas of catchments, and which is then inundated by stormwater. This cascading effect and linkage in turn causes the sewer lines and manholes to surcharge raw sewerage into rivers, estuaries and into the ocean. This has a massive impact on perceptions on water quality and suitability of the beaches for recreation and hence tourism perspectives. As this report highlights, this is one of the major findings, the monetary cost linkages between the value of tourism at the municipal scale (approximately R20billion) and the potential decline in this tourism revenue, stemming principally from a decrease in tourism appeal due to plastic diminishing aesthetics of tourist locations. These other, less obvious linkages between the effects of plastic pollution and other aspects around things like water quality, are not often evident, until this sort of linkages and landscape analysis are made.

The uMngeni River Catchment is the largest catchment within the eThekwini Municipality and has a significant influence on other systems within the catchment.

However, as of 2017, several of the uMngeni River tributaries were in poor/very poor condition, while the mainstem was reportedly in moderate ecological condition. The poor condition of this part of the catchment is partially attributable to the abundance of solid waste entering the river - primarily plastics. Evidence suggests that plastic accumulation in rivers is not only aesthetic in nature, but results in contamination, altering the Physico-chemical properties of the river, causing blockages and stagnating water. Furthermore, plastic blockages in sewer systems can result in overflow and exacerbate faecal pollution in river systems.

The decline in the health of the uMngeni catchment has dire consequences for ecosystem wellbeing, and the ability for rivers and beaches to provide goods and services. Furthermore, South Africa has committed to the Sustainable Development Goals (SDGs) set out by the United Nations (UN). The resolution of plastic pollution must become a national priority – to safeguard the wellbeing of humans and the environment (the primary engine for the delivery of environmental goods and services) and to uphold the commitment made to the UN and its SDGs.

The 2019 Swedish Agency for Marine and Water Management (SwAM) Source-to-Sea study provided information on the last known state of the study area. The study reviewed aspects relevant to good water management in the KZN province, such as key flows, stakeholders, and governance, along with information on the sources, pathways, and impacts of plastics and possible solutions in the catchment. These key aspects were incorporated into this current study (2022).

The primary objective of the 2022 SwAM study was to investigate the social and economic impacts associated with plastic waste accumulating in the uMngeni River Catchment and the catchment-derived ecosystems therein (downstream of the Inanda Dam).

“Economic impacts” focuses on how plastic affects the following:

Finally, this study considers a range of scenarios and predicts several future outcomes related to the plastic-waste problem, based on the level of response to this issue. Innovative solutions are proposed to tackle the main issues.

The methodology has at its core:

Online interviews were conducted with key stakeholders previously identified in the 2019 SwAM study. All stakeholders had, importantly, interacted with the affected river/marine system at some level. A Background Information Document (BID), provided prior to the interview, allowed stakeholders to participate in the interviews from an informed perspective.

The stakeholder engagement process highlighted that plastic pollution is part of a larger set of issues associated with the waste management system. Stakeholder perceptions strongly indicated that clearing plastic waste would lead to an improvement in quality of life for stakeholders in the affected area.

The plastic supply chain, costs of plastic and impacts of plastic on ecosystem services was summarised from literature and unpublished data from the stakeholder engagement. This was aimed at identifying the routes that plastic products followed before ending up in the environment as waste – such as (but not limited to) routes in residential areas, industrial areas, recreational sites, and roads.

The primary monetary costs associated with plastic pollution were:

There are numerous, often not obvious, but perverse negative impacts from plastic waste which compound in the environment and affect other aspects of the system.

These may be summarized in this context as:

The supply and demand of ecosystem services were simulated for a period of 10 years using the ECOFUTURES modelling system. Geographical and socio-ecological data of the study area was gathered and compiled in Microsoft Excel.

This data was also used to determine the relative magnitudes of service levels, land cover supplying the most services, and the greatest levels of services per hectare.

Several simulation scenarios were prepared and shared with stakeholders and local experts during a workshop held on the 10th of March 2022.

Based on insights gained from the workshop, the model was refined into three plausible future scenarios – namely:

The demand for services was determined based on the Human Benefit Index (HBI), a parameter which ranked ecosystem services according to the level of benefit these services generated for people. Results showed a high level of demand and dependency on services that related to Durban’s tourism industry – such as marketing icon, beach recreation and visual amenity. Consequently, due to the large demand and limited supply, these are also the services that are most at risk to negative impacts posing a serious risk to the wellbeing of its users.

Plastic waste has infiltrated and disrupted key ecological and urban systems, reducing their ability to provide goods and services, and consequently threatening the wellbeing of stakeholders in the study area. However, traditional solutions, such as landfill sites and incinerators, have finite space or tend to generate waste - therefore offering temporary solutions to an inevitable problem, and misaligning with the SDGs.

As such, innovative solutions are required, and the High Road scenario is proposed for Durban. This scenario proposes several cost-effective, sustainable solutions. The Transformative Riverine Management Programme (TRMP) aims to clear solid waste and alien vegetation from the study area, with an added benefit of promoting community involvement. Passive solid waste traps are also recommended as a simplistic means to capture and remove plastic from the supply chain.

Various social and institutional interventions, such as EnviroChamps training, school environmental programmes, and river awareness and training, were also recommended. These interventions target the lack of public awareness, with the aim to shift public behaviour to more sustainable, plastic-conscious practises. Finally, solutions such as pyrolysis and gasification units aim to create a plastic value chain. These solutions generate revenue by consuming plastic to produce useful products, such as fuel or gas (which can be used for energy generation) – effectively creating a return on investment that can fund other interventions.

Unavoidable financial costs to businesses and industries relying on these services can be expected, with the most detrimental costs resulting from the degradation of South Africa’s tourism industry - which contributed R125 billion to the South African economy in 2016. However, resolving the plastic waste issue also presents new opportunities for job creation, skills development, and implementation of long-term, sustainable solutions that generate revenue.